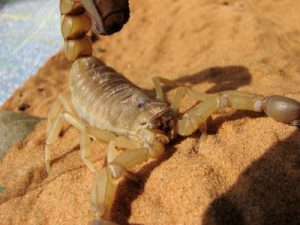 I hope I am never stung by this disgusting creature or any variety of scorpion!  But the Indian Red Scorpion is said to have the most lethal sting.  One could die if not treated within 72 hours of being stung.  They are quite hardy and can live up to a year without food or water.  Because they are very sensitive to light, they stay hidden during the day and only come out at night.  One good thing about them is that they can glow in the dark!

Today’s verse describes death as a “sting.”  Death will no longer have the victory when the mortal is changed into immortality (verse 54) and the perishable becomes imperishable.  Death seems to have the victory for now, but in fact, Christ’s empty grave means that death has been swallowed up in victory!  The venom of that grief is no longer lethal as we look to the life to come.  We share in Christ’s victory over death.  We have hope that death is not the end as we look to the One who conquered and defeated death forever!

The news is disturbing as I hear of senseless and violent death.  I can feel overwhelmed with news of terminal cancer in friends and loved ones.  Yet, as much as I grieve, I can grieve with hope, knowing that for the believer, He has promised that the very best is ahead of me.  Because of what Christ did on the cross, death and evil do not win.  No despair can erase this truth.  No tragedy nullifies my hope.  In Christ alone, there is “No guilt in life, no fear in death; This is the power of Christ in me.”

Thank you Lord, that my hope means death no longer stings.