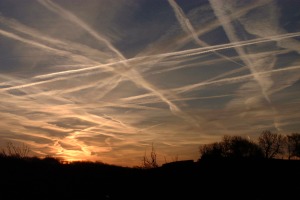 Scripture for Today: Acts 4:13 “When they saw the courage of Peter and John and realized they were unschooled, ordinary men, they were astonished and they took note that these men had been with Jesus.”

We live quite close to an airport serving France, Switzerland and Germany.  Being that there are many flights overhead, the sky often looks like this photo, crisscrossed with contrails.  I really do not mind them.  And I am not one of those believing in a “chemtrail” conspiracy.  This is the unscientific suspicion that believes contrails are proof of some kind of secret spraying program!

The word “contrail” is an abbreviation for “condensation trail.”  It is simply a long thin vapor trail sometimes forming behind a plane, usually above 26,000 feet.  All kinds of variables are at play including temperature, humidity, altitude, and air pressure over the wing.  The point is even when the airplane is out of sight, one knows an airplane has been there by the contrail.

Our verse for today is a glowing testimony regarding the lives of Peter and John.  They lived their lives in such a way as to leave a definite trace.  They had spent much time with Jesus and it showed in their lives.  Long after they were gone, there was evidence that these two men had walked this earth.  There was not much to recommend them in the eyes of the world.  They were just ordinary men without even a higher education.  Yet, they made an impact on those around them and through the Scriptures, their lives still speak today.

Life can be short.  My life is like a plane briefly passing by.  But, spending time with Jesus leaves a “contrail” of testimony to His love and grace.

Lord, give me courage to live a life totally committed to You. 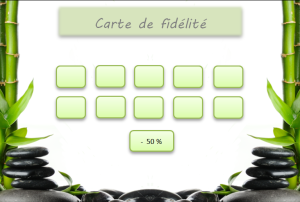 Scripture for Today: Psalm 26:2-3 “Test me, Lord, and try me.  Examine my heart and my mind.  For I have always been mindful of your unfailing love and have lived in reliance on your faithfulness.”

I have lots of these cards around.  Unfortunately, I do not always remember to carry them with me.  The idea is to encourage repeat customers.  The name of this card in English is, “Faithful Card.”  One is awarded a discount or free item after so many purchases.  With these incentives one would think I would be a more faithful customer.  But relying on my faithfulness is not a sure thing!

Our verse for today is surprising.  This psalm of David invites God to test, try and examine his heart and mind.  That is a difficult prayer to pray!  It can be quite convicting and uncomfortable to hear His response.  But there are two reasons David can be that open and honest with the Lord.  He was convinced of two truths; that God’s love for him would not waver and that God would remain faithful.

I can be just as open and honest as David.  When God sees into my heart and mind, surely He will see some ugly things.  But because He is Love and He is faithful to forgive (I John 1:9) I do not fear for what He sees.

Thank you, Lord, that I can rely on Your faithfulness. 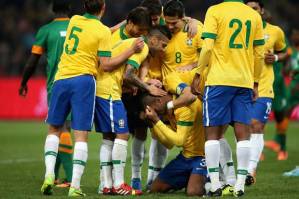 Scripture for Today: Colossians 2:19  “They have lost connection with the Head, from whom the whole body, supported and held together by its ligaments and sinews, grows as God causes it to grow.”

We are experiencing World Cup fever here in France.  This picture taken from the London Evening Standard captures some of the intense emotion.  There are big screens set up in public squares and people are proudly waving the flag of their preferred country from their homes.  I do not normally watch soccer but I have been swept up in the excitement!

Some of the victories have been unexpected!  There is surprise when a team with no super star somehow takes down a team expected to win.  Often, big hopes are pinned on some key players.  But when a team works well together, there are some amazing wins.  Regardless of which team member makes the goal, all are important and play a key role.

Our verse for today speaks of the Church as a body with a head.  That Head is Christ (Col. 1:18).  There are no other super stars.  There is no body without Him.  If we lose our connection with Him we have lost everything.  We each have a role to play as members of this body, and there is no growth without Him.  John says it differently with the image of Vine and branches…..without Him we can do nothing (John 15:5).

There is a temptation to think I am really something!  The context of this verse is about false humility and being puffed up.  With this attitude I lose connection with the Lord and I lose connection with other members.  That is because it is Christ who holds us together.  There is only One “Super Star” in the Church.

Victory is ours!  Thank you Lord, that we win together! 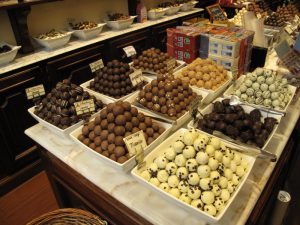 Scripture for Today: Romans 13:8 “Let no debt remain outstanding, except the continuing debt to love one another, for whoever loves others has fulfilled the Law.”

Who can resist Belgian chocolate, said to be the best in the world!  We were just in Brussels where there were chocolate shops every few feet!  We finally had to break down and buy some!  The problem came with the bill.  The saleslady, harried and tired, accidentally charged us 1,055.00 euros for a 15 euro purchase!  We thought it amusing until she explained she could not reverse it.  She suggested we leave our bank information and the store would reimburse us!  We were flabbergasted!  Even though she did not know how, she tried to annul the debt and ended up charging the same amount AGAIN!  Finally, after some expensive minutes on our cell phone to our bank in California, it all got straightened out.  And the chocolate ended up being free!

There is a much more important debt in our verse for today.  It can never be completely paid and it is the debt of love.  It is a continuing debt as no one can say they have paid it in full.  Perfectly loving others completely fulfills the Law.  This is because all of the Law is summed up in loving one’s neighbor as one’s self (verse 9).  There is only One who has been able to fulfill the Law with a perfect love; Jesus.

Quite frankly, we did not feel a tremendous love for this saleslady, although the Lord worked in our hearts to eventually show compassion and patience.  We all fall short.  Thankfully, Jesus has made His love available to us in the person of His Spirit.  His filling and control can change any situation with a difficult person.

Lord, fill my heart with Your love today. 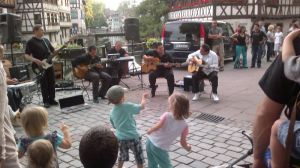 Scripture for Today: Psalm 149:3-4  “Let them praise His name with dancing and make music to Him with timbrel and harp.  For the Lord takes delight in His people; He crowns the humble with victory.”

We just celebrated the Fête de La Musique here in Alsace.  Every June 21st, the streets are filled with free concerts and impromptu dancing, celebrating the first day of summer.  This all-day music festival was launched in 1982 by the French Ministry for Culture.  The idea was to make concerts free and accessible to everyone.  Its purpose was also to encourage the amateurs, especially after a study showed that in 1982 one of every two French children played a musical instrument.  Since its beginning it has spread to over 100 countries in Europe and all over the world.

Our verse for today speaks of another reason to sing and dance.  The Lord takes delight in me!  The context of this verse says that the Lord is my Maker.  He has personally fashioned me and created me to belong to Him!  He is also my King.  My allegiance is to Him and He rules my life.  Having a humble attitude as His subject means that He crowns me with victory.  As wonderful as the arrival of summer is, these reasons to celebrate are far more impressive!

I am overwhelmed with the idea that God could take delight in me.  It just does not seem possible.  I know my own black heart.  But He sees me through the righteousness of His Son, Jesus.  He sees the perfect me.  That is reason enough to burst into jubilant song with music! (Psalm 98:4)  He delights in me and has given me victory!

For the believer, every day can be a Fête de la Musique!  May this day be filled with praise and song to You!

This work is licensed under a Creative Commons Attribution-NonCommercial-NoDerivs 3.0 Unported License.
Devotions By Jan
Blog at WordPress.com.