I hope I am never stung by this disgusting creature or any variety of scorpion!  But the Indian Red Scorpion is said to have the most lethal sting.  One could die if not treated within 72 hours of being stung.  They are quite hardy and can live up to a year without food or water.  Because they are very sensitive to light, they stay hidden during the day and only come out at night.  One good thing about them is that they can glow in the dark!

Today’s verse describes death as a “sting.”  Death will no longer have the victory when the mortal is changed into immortality (verse 54) and the perishable becomes imperishable.  Death seems to have the victory for now, but in fact, Christ’s empty grave means that death has been swallowed up in victory!  The venom of that grief is no longer lethal as we look to the life to come.  We share in Christ’s victory over death.  We have hope that death is not the end as we look to the One who conquered and defeated death forever!

The news is disturbing as I hear of senseless and violent death.  I can feel overwhelmed with news of terminal cancer in friends and loved ones.  Yet, as much as I grieve, I can grieve with hope, knowing that for the believer, He has promised that the very best is ahead of me.  Because of what Christ did on the cross, death and evil do not win.  No despair can erase this truth.  No tragedy nullifies my hope.  In Christ alone, there is “No guilt in life, no fear in death; This is the power of Christ in me.”

Thank you Lord, that my hope means death no longer stings.

Scripture for Today: Romans 15:13 “May the God of hope fill you with all joy and peace as you trust in Him, so that you may overflow with hope by the power of the Holy Spirit.”

Hearing the spotted hyena laugh never fails to at least elicit a smile from me if not a laugh of my own!  Their maniacal “laugh” can be heard when hyenas are agitated or showing aggression.  One can especially hear it when there is a feeding frenzy.  As the hyena is not certain when they will eat next, they gorge themselves whenever they can.  No joy or happiness here.  This is no laughing matter!

Today’s verse speaks of a deep seated joy that is accompanied with peace.  Unlike happiness which depends on happenings, this joy comes from God through His Spirit (Gal. 5:22)  Because of its divine Source, the result of being filled with this joy is an overflowing hope.  However, it is through the conduit of trusting Him that believers experience this joy with peace.  As we trust Him we are filled with a joy and peace that has little to do with our circumstances.

Our world is daily changing and with it, our plans as well.  When things abruptly fall apart, so does my sense of well being.  Tears, disappointment and even anger are my immediate reaction.  But when I stop to consider God’s sovereignty in everything, I am reassured.  I continue to be disappointed but at the same time I can take heart.  The more I can manage to trust Him and His plan, the more I can experience this unexplainable joy.  When my heart trusts Him then my heart can “leap for joy.” (Ps. 28:7)  Circumstances do not need to defeat or define me.

Scripture for Today: II Corinthians 4:17 “For our light and momentary troubles are achieving for us an eternal glory that far outweighs them all.”

“Are we there yet?” must be the most often-asked question while going through this tunnel!  The Laerdal tunnel in Norway is the longest land tunnel in the world at 24.5 kilometers.  Because of concern for the well-being of the travelers, advice was sought from industrial psychology consultants.  To keep people positive, three large caverns were built every six kilometers with blue lighting to suggest daylight and yellow lighting on walls to represent sunrise!  But what would keep me positive is the sign with the length posted!

Today’s verse encourages positivity as our troubles are said to be “momentary.”  Regardless of the duration, every difficulty in life is temporary when compared to eternity!   Pain is momentary but glory is eternal.  And the glory experienced in Heaven grows in direct relation to our afflictions here on earth.  The hard times experienced by the believer are not only momentary but are working for him.  What awaits us far outweighs any sadness and pain on earth.

To answer the question, no, we are not there yet.  But we will be.  Ten thousand years from now I very much doubt that I will give this pandemic a second thought.  All the trials and difficult times I experience are but for a moment  They are a temporary condition.  And as hard as they feel, it is a pain that is never wasted.  My sorrow is not for nothing.  This truth keeps me from “losing heart” (verse 16).  Remembering this keeps me looking forward to what is unseen and eternal.

Thank you Lord, that life’s trials can seem small when compared to You and eternity!

Scripture for Today: Romans 8:39 “neither height nor depth, nor anything else in all creation, will be able to separate us from the love of God that is in Christ Jesus our Lord.”

There is no way I would ever ride this roller coaster at Carowinds Amusement Park in Charlotte, North Carolina!  For me the steep climb and abrupt drop does nothing to amuse!  Perhaps if the curve were flattened and the ride became slower I would enjoy it!  The phrase, “Flatten the curve” is the rally cry today to slow down the spread of this COVID virus.

Today’s verse speaks to highs and lows of a different sort.  There is no height that can separate us from God’s love in Christ.  Nor is there any depth that can do so.  His love is never in question no matter how dire circumstances become.  Nothing in creation can create a barrier to His constant and unconditional love.  Wherever we are on the spectrum of high or low, He is there and He is faithful.  If I were to go up to the heavens or go down in the depths, He is there (Ps. 139:8).  His love never fails.

Of course, I want to do my part to “flatten the curve.”  Slowing the growth of this virus through social distancing and hygienic measures is so important.  But at the same time I am confident of God’s loving control.  His love has not changed.  These circumstances are so bizarre and unique but they will not distance me from Him.  In fact, this slow down is giving me more opportunities to know and feel His love.  How reassuring it is to know that He holds me fast!  During uncertain times, I can always be certain of Him.

Thank you Lord, for Your constant love. 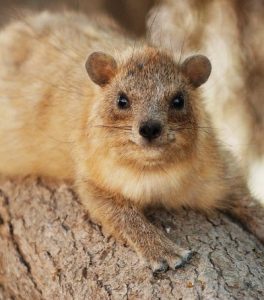 Scripture for Today: Proverbs 30:24 & 26 “Four things on earth are small, yet they are extremely wise….hyraxes are creatures of little power, yet they make their home in the crags.”

These little creatures are no bigger than a guinea pig yet they are called “the little brother to the elephant!”  He can boast to being the elephant’s closest living relative having similar teeth, toes and skull structure.  He makes his home in the rocks and the niches of sheer cliffs.  But he does not come out of his rock shelter during rainy cool weather.  And when he does come out he starts his day with several hours of sunbathing!

Today’s verse comes from a passage describing four small living creatures; the ant, hydrax, locust and lizard.  They all have two things in common, their small size and the fact that they are wise, extremely wise.  The hydrax knows when to run to the rocks to hide himself.  He knows he is small and vulnerable.  He knows his limitations.  He does not have the size and strength of his “big brother.”  Without this wisdom to know when and where to run, he would be in mortal danger!

I have no power of my own.  It is no weakness to admit my weakness and cry out to Him!  It is even a mark of wisdom.  When my heart grows faint I need to be led to the Rock that is higher and more powerful than I am (Ps. 61:2).  In the middle of crisis, I am not even sure where He is.  I need to be led through His Word and through prayer to trust and lean on His powerful presence.  He is solid and unmovable regardless of my any panic I feel.  I am wise when I run to Him!

Lord, lead me to the Rock today.

This work is licensed under a Creative Commons Attribution-NonCommercial-NoDerivs 3.0 Unported License.
Devotions By Jan
Blog at WordPress.com.