Scripture for Today:  Colossians 2:17  “These are a shadow of the things that were to come; the reality however is found in Christ.”

When I was very little I won a poetry contest reciting Robert Louis Stevenson’s “My Shadow.”  The first few lines actually tie into our verse for today:

“I have a little shadow that goes in and out with me.  And what can be the use of him is more than I can see.”

The shadows spoken of in Colossians are all the Old Testament ordinances that foreshadowed Christ’s coming.  They did serve their purpose, announcing the eventual coming of the reality of Christ.  As a shadow approaches, the reality is not far behind.

How sad to know there are those who embrace shadows today.  Rather than recognizing the reality of salvation in Christ, some would rather live with religious regulations and traditions.  And like shadows, there is only empty coldness.  One cannot love and serve a shadow.

So many try the shadows not realizing they have missed the Essence.  This is especially true for those who have grown up in the Church and think they have tried Christianity.  The fact is that religious do’s and dont’s are not the same as a personal relationship with Christ!  One can confuse shadow with reality.

Scripture for Today: Philippians 4:19 “And my God will supply all your needs according to the riches of His glory in Christ Jesus.”

Coming to the end of a  toilet paper roll always presents a dilemma.  Should the new one be put in rolling out from the top or the bottom?  An important question for every newly married couple!

The French have a saying about having no more money, “au bout du rouleau” or “at the end of the roll.”  Who has not experienced panic at the end of that toilet paper roll, thinking it may be the last one!

For the believer, we need not ever panic when it comes to finances.  Our verse for today gives us a promise.  He will supply all our needs.  His store of supplies will never run out.  One can never come to the end of the riches of His glory.

Paul wrote this verse when he was in prison.  He experienced all kinds of hardship and yet he was able to affirm this truth.  God took care of all his needs.  I am sure that while traveling on his mission trips, he saw God supply all his needs.

My problem arises from the difficulty distinguishing between what is “need” and what is “want.”  God’s Word does not promise to supply all I want.  (I know, I’ve looked!)  He knows the difference.  But He loves to give good gifts.  His generosity is amazing!

Scripture for Today:  Romans 15:4  “For everything that was written in the past was written to teach us, so that through endurance and the encouragement of the Scriptures we might have hope.”

When our daughters were young they were thrilled to wear these cheerleading outfits.  At that time my husband taught at a public high school.  He had these outfits professionally made so the girls could cheer along with the “real” cheerleaders at sporting events.  They were quite the hit!

Anytime spirit lagged among the spectators, all the girls had to do was look cute and shake their pom-poms and the crowd would find their voice again!  With just a little encouragement from the girls, the crowd would cheer.

Our verse for today gives us another source of encouragement; Scripture.  We need its encouragement to hold on to our hope.  We need the encouragement of Scripture to endure.  Our spirits sometimes lag.  We get discouraged waiting for that answer to prayer or His promise to be fulfilled.

God’s Word is so much more than a pep talk though.  His Word is a love letter where the Lord reveals His heart as well as His plan for me.  He so often points me to just the right passage to encourage me when I am down.  He speaks to me through His Word when I am tired and feel like giving up.  He knows just what I am feeling.

Nothing in this world can give me the same kind of encouragement to hope that God’s Word does.  Hope in what is certain, true and unchangeable is a sure hope and not some flimsy wishful thinking.

God’s Word cheers me on.  He is on my side and He wants me to succeed.  He gives me daily encouragement to keep on keeping on!  Thank you, Lord!

Scripture for Today:  Philippians 3:20  “But our citizenship is in heaven.  And we eagerly await a Savior from there, the Lord Jesus Christ.”

We love living in France but we do not love doing the paperwork to keep up our legal status.  (I am not showing our actual visas or “green cards” for security reasons)  It is nice that my French driver’s license has no renewal date, but all my other papers do.  From time to time we go through the entire process of filling out papers, paying the fee and making the appointments, all for the privilege of living here.  If we were to apply for citizenship we could avoid this process but we have chosen to keep our American citizenship.

Our verse for today teaches that the believer has yet another citizenship; a citizenship in Heaven.  This image reminds me that this world is not really my home.  My stay here is only temporary.  All my loyalties belong elsewhere.  Earthly things should not have the same influence on me as for the nonbeliever.  Being a citizen of Heaven means that sensual appetites are not my focus.

What then should be my focus?   I need to be looking in anticipation for the coming of my Savior.  When He comes, He will transform my body to be like His!  I will no longer do battle with fleshly appetites.  My new body will be glorious, freed from all kinds of earthly restrictions.

There are times when I am so steeped in this world and its values that I forget who I am; a citizen of Heaven.  As much as I want to live comfortably here, I can become too complacent and forget to look up.

Lord, help me to live like who I am, a citizen of Heaven eagerly awaiting Your coming! 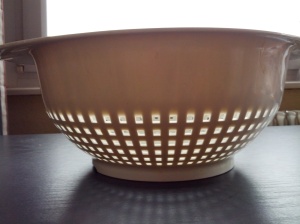 The French have a saying about memory.  When one is forgetful they call their memory a strainer or colander, full of holes!  That makes sense as they also call a memory lapse a “trou” or hole.

I often think I will remember something forever, especially when it is monumental or marks me in some way.  I am surprised to later realize that I have forgotten it.  I am so thankful for all the photos that my husband takes.  They help to plug some of those holes so the memories do not drop out!

In our verse for today David is determined to remember what God has done for him.  Being human I am sure he had problems with his memory too.  The disciples sure did!  In Matthew 16 Jesus had to remind them of his feeding of the five thousand when they were worried about having no bread.  Their failure to remember stunted the growth of their faith.

I can certainly relate to the disciples.  I so easily forget all the miracles that God has done in my own life.  When faced with a new challenge or difficulty, the memory of what He has done in the past should prepare me to respond in faith.  It is important for me to remember.

The Israelites made altars of stone to remember.  David wrote his Psalms to remember.  One generation is to orally testify to the next to remember.  God’s Word is full of testimony to His deeds and miracles.  We all need helps to remember.  It is worth the effort as the memories strengthen our faith.

Lord, strengthen my faith today with memories of your miraculous work in me!

This work is licensed under a Creative Commons Attribution-NonCommercial-NoDerivs 3.0 Unported License.
Devotions By Jan
Blog at WordPress.com.
Loading Comments...