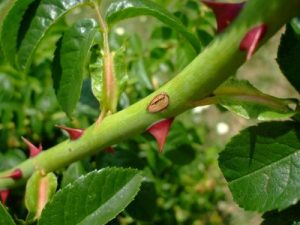 Scripture for Today:  II Corinthians 12:7 “….Therefore, in order to keep me from becoming conceited, I was given a thorn in my flesh, a messenger from Satan, to torment me.”

The weeds are getting nasty in my yard.  There are a few that hide out and attack my unsuspecting hands with their sharp thorns.  I do not like wearing gloves, especially when feeling for roots, so I am an easy target.  No matter how vigilant I am, they somehow make their way into the bunch I am pulling out.  Some even manage to attack my hands while being thrown out!  There is nothing worse than trying to dig a thorn out of a hand or finger.

In our verse for today, Paul is describing a tormenting thorn.  It was sent by Satan but in God’s hands it was used for a good purpose; to keep Paul from becoming conceited.  The text tells us that Paul had received some incredible visions and revelations from the Lord.  The temptation for Paul was to boast and feel spiritually strong because of them.

What was that thorn?  Many interpretations make that thorn out to be a physical problem.  I am wondering if it was a person in Paul’s life.  Numbers 33:55 describes Israel’s enemies as thorns in the side giving trouble.  Ezekiel 28:24 uses the image of a thorn to describe malicious neighbors!

A relationship that has gone sour, a conflict that goes unresolved, or a family member that has no interest in reconciliation can all be like a thorn in the flesh.  The pain and discomfort from those thorns is a constant reminder that I am weak and not strong.  Like Paul, my only boast should be in God’s strength.

Thank you Lord, that I can delight in Your strength regardless of the “thorns” in my life!