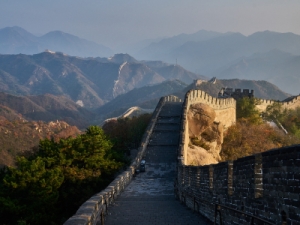 Scripture for Today:  Psalm 18:29 “Indeed, with Your help I can charge against an army; by my God’s power I can jump over a wall.

“The Great Wall of China comes to mind as the best example of an impressive wall.  Not only does it run 13,000 miles in its entirety, but sections of the wall have been around since the 7th century!  It was built to prevent attack from barbarian nomads but in fact it has been scaled many times.  Perhaps its most important role is a psychological one, serving as a barrier between Chinese culture and the rest of the world.  My husband had the privilege of running alongside part of this wall while visiting the country with his Chinese Mother.

Our verse for today speaks of a wall that is scaled with the power God gives.  For David, the troops and wall were literal.  The context of this psalm is praise to God for his deliverance from King Saul.  He calls God his fortress, his rock and his shield.  But not only is God his protector but He also empowers him to advance and attack!  A wall that looks insurmountable is no barrier with God’s power!

There are walls in my life that certainly look insurmountable.  I do not have a king chasing after me but my walls could be psychological.  Whatever seems impossible to face, impossible to finish or impossible to forget can be my wall.  But I have the same power that David had.  God’s Spirit lives within me giving me the ability to fight through and succeed.  He is my force.  He is not going to allow me to hit the wall, but to jump over it!

There is nothing too hard for You, Lord.  Help me to remember that today.

Look familiar?  This is a summer re-post due to ministry schedule.