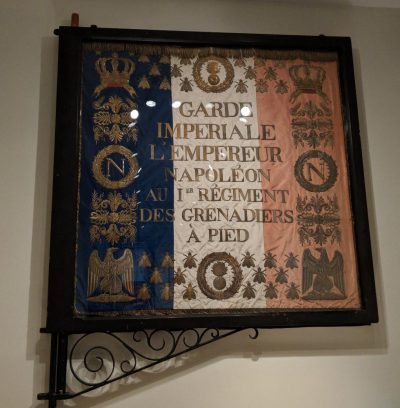 Scripture for Today: Psalm 60:4 “But for those who fear You, You have raised a banner to be unfurled against the bow.”

This elaborate banner was a flag proudly carried by Napoleon Bonaparte’s Imperial Guard foot soldiers in 1813.  It is either an original or a very early reproduction.  Banners like these were normally carried on staffs capped with a  gilt bronze eagle to symbolize divine authority.  Unfortunately, the eagle finial for this one was stolen in 1990 from the museum housing it.  So much for divine authority!  The foot soldier appointed to carry this banner had to be someone recognized for their bravery as he was an obvious target for the enemy.

Today’s verse has a banner that has been raised by our God and does indeed denote divine authority!  It is raised for those that fear and obey Him.  Unlike those who were experiencing discipline in this psalm, God’s  faithful ones could depend on Him to save and help with His powerful right hand (verse 5).  Those who fear, respect and obey the Lord are in a battle for His cause; the cause of truth, justice and righteousness.

God has raised this banner for me.  How amazing for this puny foot soldier to be part of His plan!  Because He has raised it for me,  I know I will be victorious over enemies!  But I do need to unfurl it.  It is my identifying mark.  I want to unfurl His banner with confidence, standing for the truth of who Jesus is and the veracity and authority of His Word.  Regardless of possible negative attention, I never want to be ashamed of my Lord (II Tim. 1:8).  After all, He is not ashamed of me as His banner over me is love (Song of Songs 2:4).

Thank you Lord, for the privilege of standing up for You!

One thought on “Napoleon’s Banner”