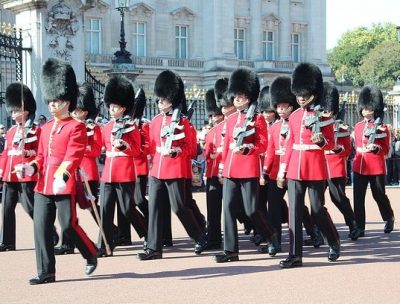 Scripture for Today: II Timothy 1:12 “That is why I am suffering as I am. Yet this is no cause for shame, because I know whom I have believed and am convinced that He is able to guard what I have entrusted to Him until that day.”

Did you know that those guards at Buckingham Palace are actual soldiers in the British army carrying real guns?  There are four sentry guards when the Queen is in residence and only two when she is elsewhere.  In addition there are five regiments of foot guards: Grenadier, Coldstream, Scots, Irish and Welsh.  Although their uniforms differ subtly, they all have the same charge to guard and protect.

Today’s verse is Paul’s declaration of faith in God’s power to guard what he has entrusted to Him, namely his soul.  During a time of discouraging imprisonment, Paul stays confident of God’s control.  He is suffering but does not feel shame for being in prison.  He shares in the sufferings of Christ but is also experiencing Christ’s abundant comfort (II Cor.1:5).  Paul knows that his soul will live on even if he does not survive.  God has promised and He is all -powerful and able to keep His word.

Knowing and being convinced of God’s power to guard my soul makes all the difference to how I live.  And it will make just as big a difference to how I die.  My eternal security rests on His finished work of perfect sacrifice.  It does not rest on me, my laundry list of good works or how I am feeling.  My soul is in His powerful hands and nothing and no one can pluck me out of there! (John 10:28).  I have no power to guard anything.  But He does.

Lord, I trust that You guard my soul!