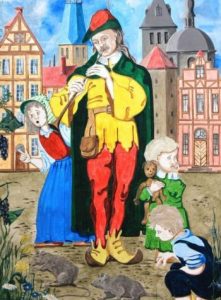 Scripture for Today: James 1:14 & 16 “But each one is tempted when he is lured and enticed by his own desires. Do not be led astray, my dear brothers and sisters.”

It seems a strange story that a magic pipe could lure away rats and children!  The Pied Piper German legend dates back to the Middle Ages.  He was supposedly hired by the mayor of Hamelin to rid the town of rats.  After luring them to their death in the river, he was not paid what was promised.  In revenge he lured away the children!  Today, the image of a pied piper is used to describe someone who offers strong but elusive enticement.

Today’s verse describes the source of our temptations.  It is never from God as His desire is to keep us from sin (verse 13).  Rather we are lured and enticed by our own desires.  There will always be temptations in the life of a believer.  The temptation itself is not sin, as Jesus Himself was tempted.  But it is our response to it that can be so devastating.  Like following the pied piper, we are lured by the bright colors and the music.  Sin promises so much but fails to deliver, ending only in death (verse 15).

Sin can be so attractive to me.  Sometimes it is just easier to indulge, to compromise, or to take shortcuts that I know in my heart are not right.  But what promises to fulfill never really does.  What starts out as pleasurable brings consequences I never anticipated.  My heart and its desires can be so deceitful!  I do not want to blindly follow what everyone around me may be doing.  Doing things God’s way may be more difficult but the problems avoided and the blessing He gives are worth the effort!

Lord, keep me from being led astray!