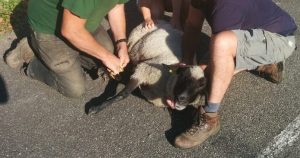 Scripture for Today: Isaiah 53:6 “We all, like sheep, have gone astray, each of us has turned to our own way; and the Lord has laid on Him the iniquity of us all.”

What was that racket?  My husband was in the middle of his shower when he heard some bizarre noises!  It sounded as if someone was rearranging the furniture, but there was also loud bleating, shouting and running footsteps.  How bizarre to see this sheep in the living room knocking into things with a crazed look in his eyes!  He had run in from our rural French street into the open doors, with his handlers in hot pursuit!  It took three of them to hold him down and get him under control!

What a perfect way to illustrate the truth of today’s verse!  This sheep was not where he was supposed to be.  He had certainly gone his own way, ignoring his keepers and the other sheep.  His headlong movements could have hurt him and it took some pretty drastic measures to correct him.  I am sure he was none too happy to be bound with that rope.  And we are just like that sheep.  We turn our back on the Shepherd thinking we know better.

How loving and gracious God is to take on Himself the punishment of my silly rebellion.  Jesus paid the ultimate price of my sin, giving me peace with God (verse 5).  And as a forgiven “sheep” I have the enormous privilege of following my Shepherd.  His way is so much better than my own.  He does not lead by prodding me from behind and I don’t just see His back ahead of me.  No, He walks beside me.

Thank you Lord, for turning me back to You and Your way.