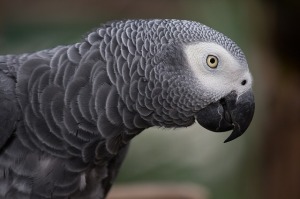 Scripture for Today: I Thessalonians 1:7-7a  “You also became imitators of us and the Lord, having received the Word in much tribulation with the joy of the Holy Spirit, so that you became an example to all the believers…”

For twenty years we enjoyed our African Grey, Gaby.  She filled our home with whistling and chatter both in English and in French!  We were so sorry to lose her early as their average life span is forty years or more!

We would have to be so very careful of what was said in her presence as she imitated everything!  It was sweet when she would say, “bravo!” as I played piano or answer the phone before we did!  She would often declare her love or say she was sorry.  That was the good imitating.  Bad imitating was the impolite bodily noises or the expressions of frustration!!

Our verse for today encourages us to be imitators.  Paul, Silvanus and Timothy, as well as Christ Himself are to be our examples.  Those addressed were living through hard times as a result of their faith.  Not only were they staying the course, they were experiencing joy in their suffering.  They in turn became examples to other believers.

Today, I not only have the example of Christ and early believers, but I have modern-day examples.  I will never forget the courage of a friend going through cancer treatments.  Her concern was always for the others in the room and their pain.  She faced hers with a supernatural joy from God’s Spirit.  Visitors would be encouraged in their own faith when intending to bolster hers!

How amazing that joy in suffering is even possible!  The example of others shows me that faith is real.  Whatever comes in my life, may I be an example as well!