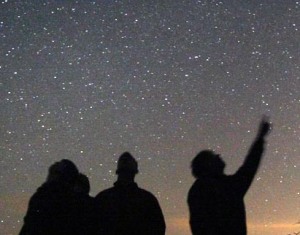 Scripture for Today: Philippians 2:14-15 “Do everything without grumbling or arguing, so that you may become blameless and pure, ‘children of God without fault in a warped and crooked generation.’ Then you will shine among them like stars in the sky.”

It seems an impossible task, to count the stars.  But who among us has not at least tried as a child?  I was surprised to learn that there is an answer!  9,096 stars are visible to the naked eye if one could see both hemispheres at once!  So of course, we have to divide that number in half.  Maybe the number 4,548 seems underwhelming but in fact that number becomes even less impressive with poor visibility or in lighter skies over cities.  However, with only a three-inch telescope that number jumps to about 5 million!

Today’s verse describes those who do not grumble or argue as shining stars in the sky.  Perhaps it would not be so difficult to count these stars!  Someone who does not grumble and argue stands in stark contrast to everyone else.  And the light from even just one of these stars pierces the spiritual darkness around it.  People notice when there is a sweet uncomplaining spirit in the face of adversity.  I know because my Mother was one of these stars.  Even though at 95 she had to depend on others, lose her mobility, and suffer all kinds of indignities, she did not grumble or complain.

I often wonder how best to “let the light shine” (Matt  5:16) so that people see and God is glorified.  This answer seems too simple.  But I find it is one of the hardest to live out.  Thankfully, it is God who works in me to bring about what is not natural! (verse 13)

Lord, make me a star!  Keep me sweet and uncomplaining today.